Commissioned by a private client, this impressive yacht model was constructed at the same time the real TERN yacht underwent refurbishment to its original incarnation by Spanish restoration workshop, Ocean Refit. The projects, despite being drastically different scales, ran parallel to the point where design decisions and technical details were being exchanged in a collaborative process. Further input came from Chuck Demangeat, who assisted us in faithfully recreating the sails and rigging.

These two projects – the refurbishment of a classic boat, and an accompanying scale model – are the products of pure passion. TERN itself has a prestigious history, being originally designed by nineteenth century designer William Fife, and constructed by John Hilditch in Carrickfergus, Northern Ireland. Nine of these Sea-Bird-Class boats were built, each named after a sea bird, and TERN was one of only three to survive the century. Between 1995 and 2000, the boat was modernised and almost completely rebuilt, being sailed around Falmouth and Fowey, as well as attending numerous regattas. In the present day, TERN has been acquired by a new owner, whose passion for sailing is bringing the yacht back to her original sailing state from the nineteenth century – along with our commemorative 1/12th scale model.

While the hull on our model was machined with computer-aided precision, our technical drawings were drawn up from the original pencil plans made in 1897, guided by the restoration team in Spain. In keeping with the heritage and history of the yacht, we chose to use raw materials where possible, such as hand-formed brass and rich hardwoods, rather than contemporary plastics and painted finishes. The broad main deck areas were cut from fine sections of maple, and the superstructures were assembled from hand-shaped stained cherry. While the mast and sails are removable to facilitate transportation, the fine wire rigging is as faithful to reality as can be made at this scale, and the model can be ‘rigged’ once the mast is in position.

As modelmakers it is greatly satisfying to be part of a project motivated by passion for the heritage of yacht building, and we are proud to add the TERN 1/12th scale model to our portfolio of marine models. 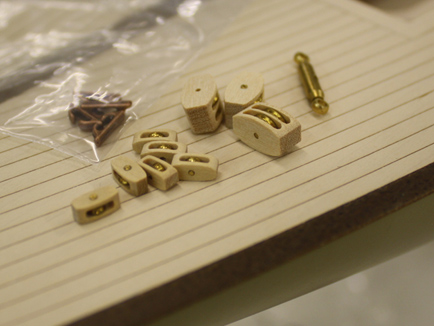