The Sea Truck was one of James Dyson’s first engineering projects, while  still a student at London’s Royal College of Art, James Dyson co-invented the Sea Truck work boat.  With sales amounting to 500 million. The Sea Truck was a flat-hulled, high-speed water-craft that could land without a harbour or jetty. The now world famous designer first developed the idea for a low-cost, modular work boat for Rotork Marine Ltd. in the 1970’s – long before he was known as the man who re-invented the vacuum cleaner.

As regular suppliers to Dyson’s R&D and marketing departments Amalgam were obviously delighted to be asked by the James Dyson Foundation to produce a model of his iconic design.

Our 1/18th scale, full-hull work boat model features intricate components and a fine level of detail, such as the propeller / drive assembly, mast, running lights, deck fittings and handrails.  The 3D printed cab is similarly detailed with controls and instruments all faithfully recreated. The hull is assembled from vacuum-formed panels  built around a  plywood base. A mirrored display plinth allows the viewer to see the detailed underside of the hull as a reflection.

We generated the 3D CAD data and technical drawings based solely on written descriptions and photographs, working them up into usable Sketchup files which were then used to produce actual components via 3D printing and laser-cutting, both used to complement more traditional model making methods. This echoed the BMT Mastiff, another project where we built our working drawings from the ground up.

The model features in the Royal College of Art’s 175th anniversary exhibition.

Work boat models are just one of many type of maritime model we produce of course, clicking here will take you to a selection of other examples of our  work. 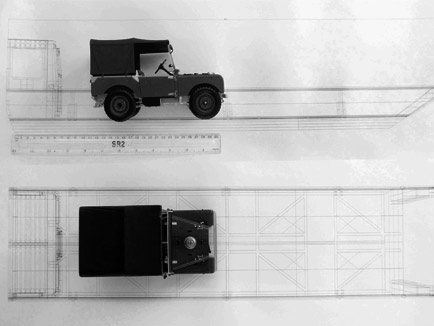