This striking 1:55 naval model involved some clever jig-making to position the fins and align the intricate internal spaces. The outer shell of the section was made from carbon fibre, which provided a great deal of strength for its overall thickness.

We used CNC processes to rapidly carve out the major interior details, such as the engine in the stern of the model. The arrangement of interior walls and partitions within the fuselage were fabricated and assembled in a similar way to many of our architectural models. The panelling on the exterior of the main body was carefully airbrushed by hand, and the baseboard incorporates a seabed texture similar to the Seagen tidal turbine model.

The Vidar® – 7 section model continues our strong reputation for naval model making and marine engineering models, and was present at the DSEI 2013 trade show along with the BMT Venator® – 110 model. 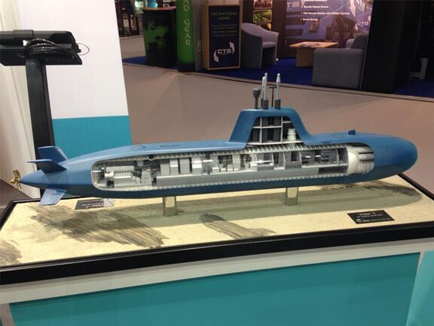