The fells were carved by hand from reference photographs, and an element of realism was achieved by hand-painting the rock faces and layers of coloured flock. The elevations on the buildings in the settlement were drawn up as graphics, printed onto vinyl and wrapped around the blocks; creating a high level of detail.

These fine details were included to draw in the eye of the viewing public, and to better engage them with the various renewable and green technologies that can be integrated into the landscape. These include wind turbines, hydroelectric power, reed beds, solar PV units, anaerobic digestion plants and ground source heat pumps supplying energy to homes and local businesses in a small town. The model includes various different types of settlement, such as a caravan park, residential areas, farms and industrial sites.

The model was funded by CLASP, the Lake District National Park Authority, and the Sustain Eden project led by Cumbria Action for Sustainability. It is currently being used in public engagement workshops. 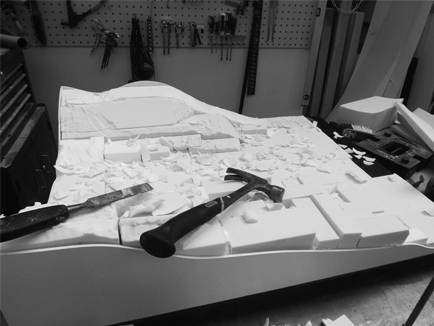