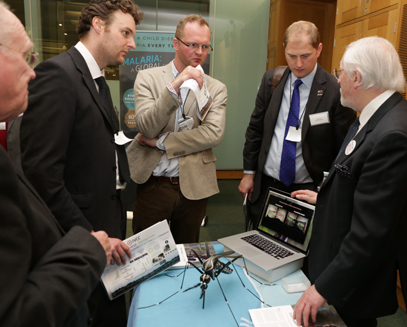 Attending a busy exhibition at Parliament on World Malaria Day, Jed Stone from IVCC wanted an innovative way to catch the attention of passers-by. IVCC is a highly specialist not-for-profit, developing insecticides as part of international vector control efforts. Their focus for the exhibition was on making sure MPs understand how the international development funding is being spent.

We were commissioned to make exhibition large display models of two mosquito species, which carry vector-borne diseases such as malaria, dengue fever, yellow fever, and the Zika virus. His main requirement was for the models to be strong enough to be touched and passed to people, to engage them in discussion.

Working from photos of the mosquito species led the team to make innovative choices in the model design stage, to achieve durability. Where one species was built from three parts, these were pinned to improve the strength; the second species was made as a single form. Legs were crafted from steel welding rods, and both heads were hand carved. Laser cut polycarbonate sheets became wings, with laser etching to create realistically curved veins. Producing these insect models at such a large scale enabled Amalgam to include accurate finishing touches.

IVCC set out their stall where the two models were placed on the table among leaflets and on-screen information.

Amalgam fulfilled the models to a higher standard than we imagined. Even the entomologists found the detail in the insect models was very realistic; and visitors to the exhibition thought they were quite beautiful. It was a great way to get people talking about vector control and the danger these insects represent.

Jed Stone, Head of Communications and Advocacy at IVCC