This incredibly intricate industrial display model is a great example of the impact new digital technologies can have on modelmaking. The bulk of the work took place purely in the digital realm, taking nearly five weeks to process client-supplied CAD into a kit of 3D printed parts that could be snapped together in a morning.

The original digital model of the Continuous Processing System was provided to us at 1:1 scale, was meticulously edited from an engineer’s technical specification to a file that was ready for 3D printing at 1:20 scale. This involved resizing the pipes so that none were less than 1.2mm diameter (based on the resolution of the 3D print), and digitally joining together over 6000 separate components into 8 single pieces.

After this extensive conversion period, the forms were 3D printed in colour. Unlike many display models, the 3D printed parts required no finishing of any kind, and simply clicked together using the peg-and-socket joints drawn into the digital models.

The 3D printed industrial display model represents a facility that produces domestic washing-up liquid with the ability to recycle waste from the process back into itself. Each colour indicates a different area of functionality of the larger assembly.

This model was one of three we made for SPX Flow Technology, the others being the FT Section model and the CEP model, both extensively 3D printed display models. 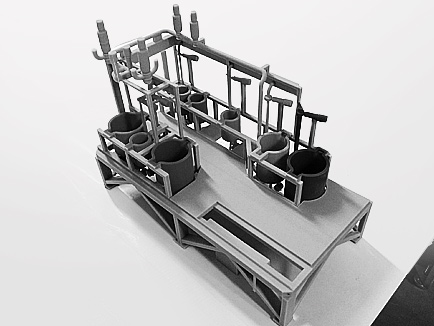