Before making the 1:200 scale model seen above, we made the smaller, more compact 1:500 version below, used to successfully win the bid. 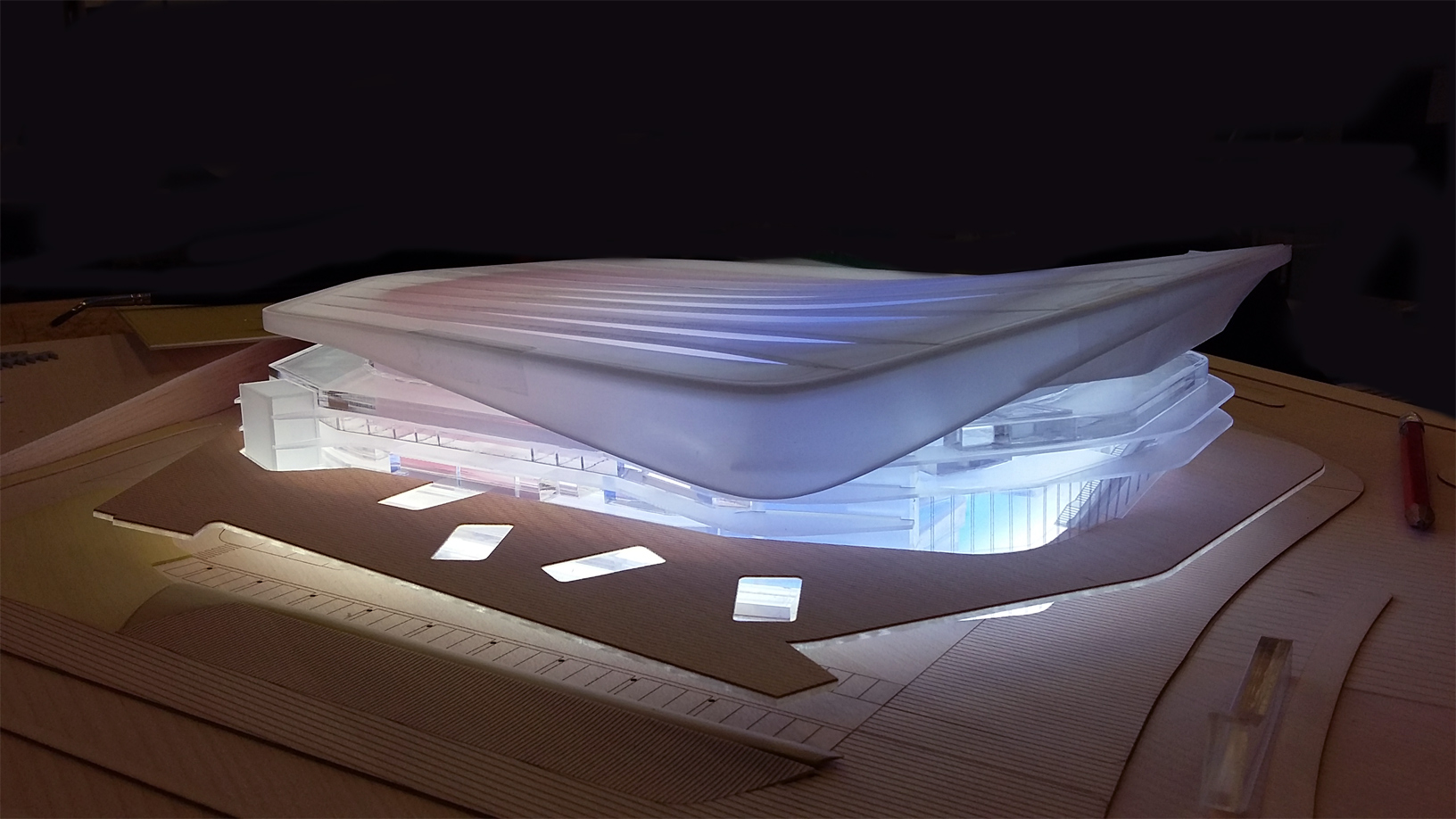 Their client then requested a much larger 1:200 model to be the centerpiece of a press presentation, to launch the project to the public with as big a splash as possible. We had two weeks and a good deal of creative freedom to develop an engaging, high-detail, large scale model, built light enough to fly out to Barcelona for the press event, with a removable roof section robust enough to handle without breaking.

The technical drawings associated with the scheme gave a broad overview of forms and internal spaces, and described a scheme moving through its conceptual stages towards completion; the information was in constant state of flux as design decisions were addressed, resolved and finalised on a daily basis. Conscious of this, with understandably little in the way of surface finishes to add busy high-impact interest, we wanted to avoid making a model that was too minimal or simple. We considered ways we could add layers of interest and detail over the relatively unadorned conceptual forms to create something attention grabbing that would warrant a spectacle.

We embraced the conceptual nature of the drawings and layered the model up as individual frosted components, the more complex of which were 3D printed, built over a dynamic lighting pattern that breathed and rippled through the whole structure. We further dressed the scheme with laser-engraved details and clear vinyl prints over the broad surfaces, creating a contemporary, layered and visually rich model.

After the press release, the model will be on display in Barça Museum, which attracts over a million visitors per year.

The design was presented to the public with a deserving sense of ceremony, the model being unveiled at 35:00 minutes in the video above.

The dynamic lighting system embedded in this model displays a pattern which cycles through tones of red and blue, reflecting the Barcelona team colours. The bulk of the structure of the stadium is made from materials that are either frosted or completely clear, allowing the pattern to glow through the whole building.

In terms of cost, there is little difference between static ‘on-off’ lighting and dynamic lighting, since the hardware is virtually identical. The real difference is in the ‘brain’ of a dynamic lighting setup, which is purpose-written code and therefore incredibly flexible.

The pattern – the colour and behaviour of the LEDs – can be modified or completely changed at any point during the build, without having to replace any hardware, saving time and money. This flexibility is invaluable when working on projects in the earlier stages of the design process, where time is a factor and important decisions are still being made.

The advantages of flexibility and freedom from the hard-wired limitations of analog circuitry means there is no strict reason for model lighting to be static. Aside from attention-grabbing showpieces, dynamic lighting can be used for functional or interactive purposes, such as animating transport routes, showing the flow of people through a public space, or indications of power consumption over time – potentially anything the client wishes to highlight. In any scenario, dynamic lighting is a powerful tool to turn an otherwise static model into something closer to a multimedia installation.