The process of creating the ‘Scrumpty’ character combined character design, an element of branding and short-run manufacturing techniques. We designed Scrumpty from an initial written brief, managing the whole process from concept sketches, hand sculpts, digital reproduction and a final short production run. An overview of the design process can be found here.

We created Scrumpty for Marketing Gloucester, as a friendly figure combining the city’s Rugby heritage with its famous ‘Humpty Dumpty’ fairy tale. The design of the character was intended as a blank canvas, as part of a competition open to the public to submit their own paint schemes and ideas, with the winning entries being stationed around Gloucester city centre in a ‘Scrumpty Trail’. Amalgam’s own Jenny Sealy and Elaine Carr were among the winning entries, with a ‘Hard Boiled’ Scrumpty and realistic apple-skin finish respectively.

We used manufacturing methods that would ensure a reasonable amount of durability, since these big Scrumpties would have to withstand both the outdoor elements and some public interaction.

Personifying a brand with a character literally gives it a face – it can cement brand awareness in the minds of a target audience. While Scrumpty was designed and developed completely in-house, we have provided modelmaking services to a number of companies who use branded character design in their marketing, notably Aardman, whose Wallace and Gromit characters have become icons. 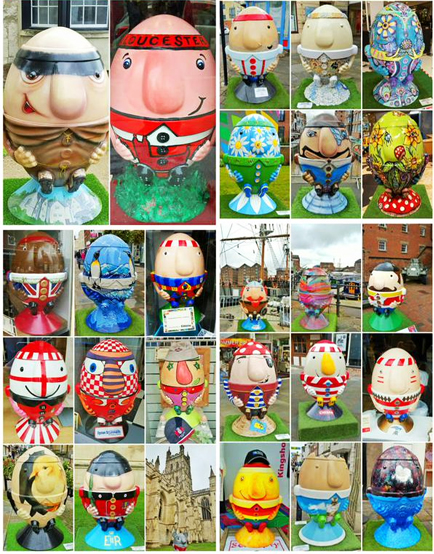