This clean, highly graphic architectural tactile model differs from traditional models in that it has been designed to be perceived almost exclusively by touch. It is to assist those who are blind and visually impaired in understanding the proposed new layout of Gloucester Bus Station, designed by BDP, principally the pedestrian crossings, paved outdoor areas and layout of internal spaces.

A standout feature of the tactile model is the 3D printed Braille labels set around the base, indicating road names and various other features. After a number of experiments to reproduce Braille using lasercutting processes, we ultimately decided that 3D printed Braille was the better option. The precision and tolerances of 3D printing allowed us to conform to UK Braille standards of size and spacing – and also create the satisfying rounded ‘bumpy’ texture. The prints are clear as glass, initially designed to be bonded over the standard written text.

We began the design process experimenting with texture; instead of paint effects to visually distinguish various paved areas, we used different engrave depths to create different tactile sensations. For example, the smaller limestone pavers around the entrances have a noticeably finer engrave than the larger square flagstones around the coach bays. The pedestrian crossing areas were created with various overlaying engrave passes to achieve the distinctive and recogniseable ‘nodule’ texture at an exaggerated scale.

Other features include strips of soft Baize felt to indicate the positions of furniture in the main waiting areas. The internal walls, instead of being full height, are ridges of black plastic, with breakages to indicate doors and other features.

Head over to our Services Pages to learn more about our 3D printing capabilities. 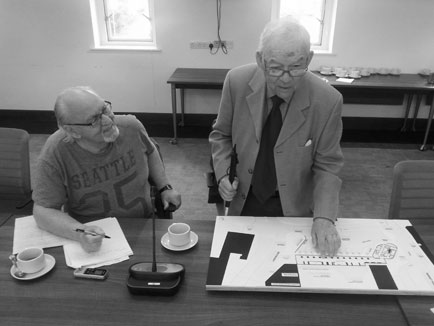