This interactive for Cardiff School of Biosciences was completely hand sculpted and artworked with realistic capillaries, veins and viscera. The internal organs of the otter, while simplified, are anatomically accurate and must be arranged inside the otter’s body in the correct order and orientation. The otter was made as part of Project Splatter, a nationwide research project to quantify the UK’s roadkill through social media channels such as Twitter and Facebook.

Nicknamed ‘Colin,’ the anatomic interactive display was featured at Cardiff University’s exhibition at the Natural History Museum in London as part of the June 2014 Universities Week, which included research stations, pop-up performances and demonstrations covering a range of research-based themes. At Cardiff University’s exhibition, participants were encouraged to assist in performing an autopsy on Colin to identify his cause of death.

Similar anatomic interactive displays and exhibition projects we have made include the artificial heart display model for the Glasgow Science Centre, which incorporates cast silicon lungs. 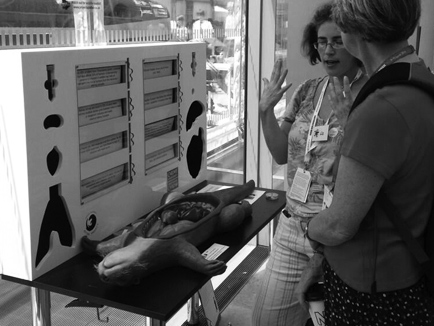