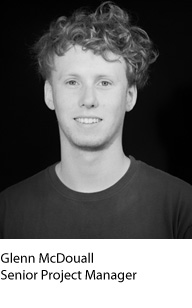 Glen was spotted by Amalgam Directors as winner of the prestigious Best In Show Award at The New Blades Exhibition in 2010, having just graduated from Arts University Bournemouth with a 1st Class Honours Degree.

Glen was immediately snapped up by Amalgam and became a highly valued member of our model making team. He also continued to develop his interest in technology, becoming Amalgam’s main consultant for 3 axis CNC programming and operation, in both 2 and 3D.  With his natural ability and drive for problem solving Glen began Project Managing in 2013.