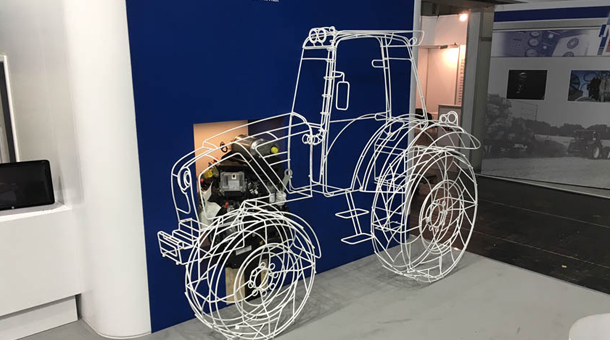 Exhibit design, display models and trade show stands can make a huge difference to the successful launching of a new product. Even a remarkably innovative and marketable design could go unnoticed if it isn’t given appropriate promotion, to grab a busy audience’s attention, at the right moment. In this case study we look at a project that came about in a collaborative effort between EF Engineering and Amalgam Model making. EF Engineering provides show finishing services to Perkins to display their diesel engines. John Knight from EF Engineering, and Chris Conlon had been in contact since early in 2015, discussing opportunities to collaborate on new exhibit designs displaying Perkin’s engines.

Q1. What were the challenges faced by the team building the exhibition stand?

CHRIS (Amalgam director and project manager): Perkins was looking for a way to make an impact on the agricultural engineering market through original exhibit design for the Agritechnica Trade Show, held in Germany.  They wanted to display one of their diesel engines inside a tractor. There was a conference call between EF Engineering, Perkins and Amalgam during which various ideas were discussed and I put forward the idea of building a wire frame tractor. EF Engineering and Amalgam had been talking about collaborating for some time and then this opportunity arose in which they needed a high impact solution in a limited amount of time.

Q2. Where did the idea for the wire-frame come from? Can you say something about the creative process behind the design?

CHRIS: The exhibit design process was really driven by the challenge, which was the time-scale, and the skills and materials I knew we could offer.  I felt confident that it could, in theory, be done, and had trust in the expertise under the roof of Amalgam. It was a material and skills driven design; maker-driven.

JOHN (engineering model maker): “We had a meeting together and the first question was “Can it be done?”  So, we discussed whether it was possible, in particular the time-scale would be challenging as we only had 2 weeks. In the second meeting we said, OK, let’s do it!” 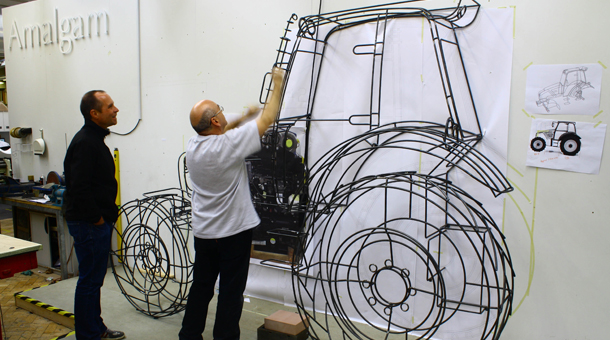 Q3. What challenges were faced by the design-and-make team in realising this project and how were they overcome?  What processes were involved in the making?

SEAN (designer): “My role was to produce a 3D CAD model of a generic, contemporary tractor. From this 3D model I had to pick out lines that caught the form of the tractor to design the wire-frame.  I had to find a balance between simplicity and detail – the challenge was to give the impression of a tractor in long sweeping lines and a minimal number of specific details. I opted to include headlights, wing mirrors and mud guards. So it was a highly simplified form.  All the way along I was discussing the wire frame with John, making sure that it would be achievable.  Of course, I had to make sure it was all connected as it would be built by welding the “lines” [steel bar] together.” 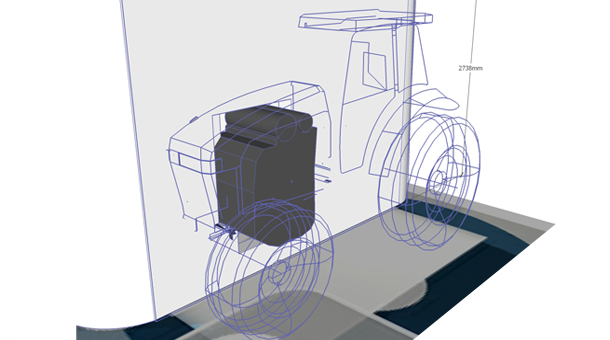 JOHN: “Sean did the CAD for the tractor which I had printed out full size. It was a tremendous help having that to look at – I had it laid out and pinned onto the walls when I was building – and I could use it to bend the steel to.  It was all bent steel, welded together.  We built it in 5 parts – 3 middle sections which bolted together and 2 free standing wheels. Each section was pretty heavy so it had to be built like that, and, of course, that made it possible to transport to Germany.  Sean’s CAD was all the information that I needed.  The only modification made to it was to the area housing the engine as those specific dimensions were provided later.

Q4.  How successfully do you feel the finished product serves a specific purpose as an exhibition piece?

CHRIS: “I think it caught people’s attention. We were going with the notion that sometimes less is more – with a wire frame model you want to capture the essence of the form without over-complicating things. It should look elegant and instantly recognisable. We also didn’t want to obscure the view of the engine housed by the tractor model, which, after all, is the sale piece.  The wire frame had a white powder coat over it and was placed in front of a blue background, so we also had in mind the idea of a 3D blue print, or a line drawing. The finished model was, I think, very well received.

Q5. What feedback have you had from the client regarding solutions provided by Amalgam?

CHRIS: “We’ve had a testimonial from John at EF Engineering, describing their experience of the collaborative design process, and the success of the installation at the exhibition.

“In preparation for Agritechnica it become clear that there was insufficient time to add another show-finished engine to the stand. As an alternative we were asked whether we could fit a factory engine into a model tractor for the event. At this time we were developing a relationship with Amalgam, waiting for the right project to collaborate on. This challenge seemed to be that project and something we both felt we could make a big impression with. The whole process, from concept through to completed project, required huge levels of trust by all involved. Once a collective understanding and a scope had been agreed we all had to just get on with delivering. The timeframe meant everybody had to remain focused on what was achievable. The Amalgam team made every effort to maintain high standards despite these very tight deadlines. The result was a fantastic looking installation that met all the clients’ expectations and attracted a lot of attention throughout the exhibition. Great ideas stay as ideas unless you can unlock that potential and create a realistic deliverable. Amalgam did exactly that with this project. Hats off to the whole team.” – John Knight, EF Engineering

Q6. Has this exhibition piece been well received by the public and specific intended audience?

CHRIS: “The tradeshow was a huge event and all sorts of people from the agriculture industries attended – farmers, equipment designers and manufacturers, as well as interested members of the public. Throughout the exhibit design process we kept a focus on how to draw attention so that the audience engaged with the product. We’ve been told that people were stopping to look at the stall as they walked through the show so it seems to have caught people’s interest, which is what we wanted.”

How Interactive Props help bring drama into a story

User Experience and Interactive Models. to educate,entertain and inform