The 1:12 scale radio telescope display model we built for the Science and Technology Facilities Council (STFC) back in June has been in the Houses of Parliament to highlight the economic benefits of the UK’s scientific expertise for MPs. The display model was initially built as a centrepiece showcasing the UK’s contribution to various international astronomical endeavours, in this case support of the LOFAR Low Frequency Array, an international network of radio telescopes coordinated by Astron in the Netherlands. The array, which is over a thousand kilometres across, enables radio astronomers to view objects and events that occurred billions of years ago. 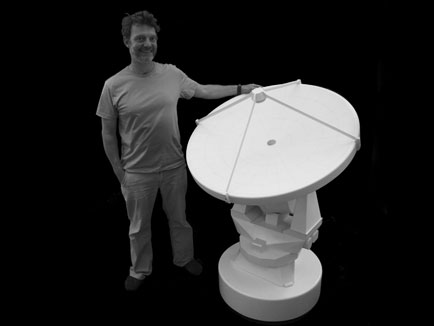 Amalgam has a strong tradition of providing display model services for a range of contexts, and the term ‘display model’ covers a large range of ground. Consequently we have provided models for point-of-sale displays, exhibitions and branding, and most recently projects for feature films and television, creating large setpieces, more details of which will be announced soon. Head to Our Work to see some of the display projects we have worked on.

Realistic visual effects are in demand at this festive time of year for window displays,…

The Asco Numatics Animatronic grasshopper was a project Amalgam modelmakers undertook a while back, but can…