Our work for EDF Energy can be seen in the news again, this time at Sizewell Visitor's Centre. Head to www.eadtv.co.uk to see a video of some of our engaging and informative interactives - we are still very much in the middle of the project and will announce full details in the new year.

Our interactives for Hinkley Power Station visitor's center can be seen in this video by the BBC, as can besuited Amalgam Models project manager Dan Fenwick. The video can be seen at http://www.bbc.co.uk/news/uk-england-somerset-20601912, and more details on the interactives will be announced in the new year.

Hinkley Power Station opens its visitor centre today, featuring a series of interactives built and installed by Amalgam for EDF Energy. Constructed as part of a scheme to raise awareness and inform the public on nuclear energy, these engaging interactives ranged from demonstrations on how nuclear power is used to create energy, how the process is managed and how much energy is needed to power modern appliances. They form part of a larger project which we have been working on for most of 2012, more details of which will be announced in the new year.

Hydrate for health's The 'Hydrant' water bottled developed by Mark Moran, is a simple yet effective healthcare innovation designed to allow immobile hospital patients to keep themselves hydrated and do away with cumbersome and heavy bedside jugs of water. Amalgam Modelmaking assisted Mark in the development of the one-piece screw cap and integrated clip, central to his innovation. The prototypes were used for evaluation and testing before marketing the bottle to the healthcare industry. The product has now been short listed for The Queen’s Awards for Enterprise 2013 in Innovation. Head over to our work for more details on the Hydrant. Healthcare innovations such as the Hydrant are typical of the type of project undertaken by Amalgam either working directly for clients such as Mark Moran or via other design / product development companies.

Bruce Munro's 'Beacon on the Hill,' a light installation constructed to raise awareness for Breast Cancer with the support of charity Cancerkin, will be lit this coming Saturday. The Beacon is situated atop Long Knoll, a historic site, and will be visible for many miles in the dusk.

To celebrate their 175th anniversary, the Royal College of Art is presenting an exhibition of historic and contemporary works of art and design by leading RCA alumni and staff. This prestigious list includes Sir James Dyson, and Amalgam Modelmakers provided a 1/18th scale model the 'Seatruck,' one of his earliest projects. The exhibition opens on the 16 November and runs until 3 January 2013. More details can be found on the RCA Website or on their Facebook Page.

The Seagen Tidal Turbine model was built at Amalgam to be transported easily around the country for public demonstrations, and its latest home is the Siemens stand at the International Conference on Ocean Energy in Dublin. The ICOE is the global marine energy event focused on the industrial development of renewable marine energy. Held every two years, the aim of the event is to share recent experiences from research and demonstration efforts.

Our client and friend Bruce Munro has announced plans for a Beacon to be constructed atop Long Knoll in Wiltshire, to raise awareness for and support the charity Cancerkin and Breast Cancer Awareness Month. A team of five will spend a week assembling the huge structure, and when lit will be visible for many miles in the dusk. More details can be found in this BBC Article. 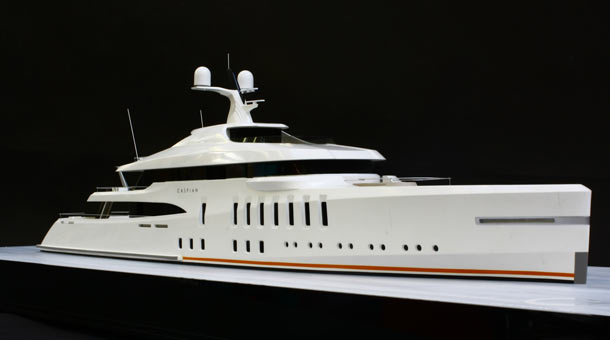 The 70 metre superyacht model Caspian has been on display at an exhibition of Claydon Reeves'work, held by Fraser Yachts. The showcase presents the range of Claydon Reeves’ superyacht designs and concepts, where visitors can see conceptual visualizations through to detailed scale yacht models. The showcase runs from 15 May until 15 August 2012 at the Fraser Yachts London office on St James’ Street. Update: The show this post refers to is long over, but you can find out more about this model by clicking here.