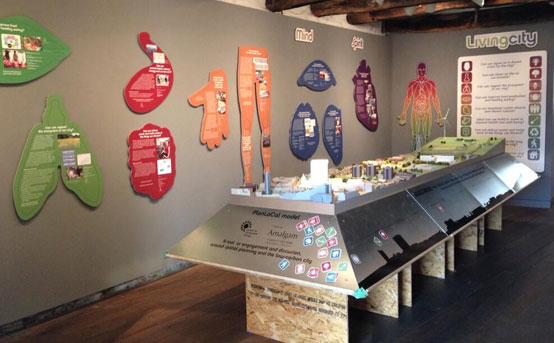 Installed at the Architecture Centre down on Bristol Waterfront, the Living City is an interactive architecture exhibition where an analogy is drawn between the city and a human body. Users are encouraged to think about what is needed to create a balanced, healthy urban environment.

The centrepiece for this exhibition is a model we made for the Center for Sustainable Energy some time ago; in its original context the PlanLoCal model shows how various low carbon technologies can be installed in rural and urban settings. In its new role in this exhibition, the model features an interactive element, where users can place magnetic icons along the sides of the base to highlight key points within the ‘city-body’, such as energy, transport and recycling. The exhibition also features key documents and case studies, and runs until the 10th of August. You can see some images up on the Architecture Centre’s Facebook page. Be sure to head down! 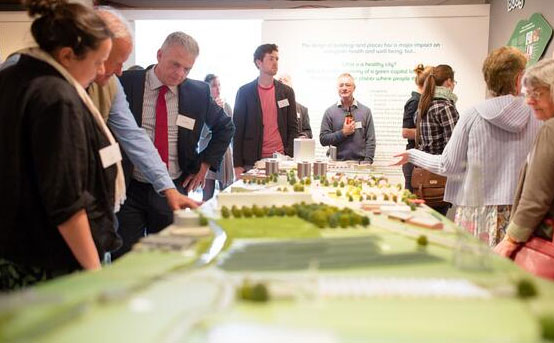 Our own Rob Bakewell attended the Device Developer’s Conference recently, championing Amalgam with a stand showing off the range of fantastic things we can do, such as 3D printing, pantone-matched components and a wealth of vacuum cast goodies – as well as our packaging design and graphics capabilities. We also had examples of the various enclosures we’ve provided, including those for the Triggertrap Ada. The event showcases development technologies from around the world, including hardware design, software development and project management.

Something we’ve been looking forward to a good while is the London Festival of Architecture, beginning next week. The event features open studios, workshops, discussions and exhibitions. There is masses to see and do in this month-long event which celebrates all aspects of British design and architecture. This year’s event should be particularly interesting considering the buzz starting to surround the next generation of London’s ‘very tall buildings’, which will likely throw up some meaty discussions on sustainability, integration and who will be living and working in these modern mountains of glass and steel.

The London Design Festival – still a few months away – has started announcing the installations and displays on offer across London, including the Drone Aviary, courtesy of Superflux. Regardless of whether you’re a transhumanist looking forward to The Singularity or worry about the implications of unregulated, unmanned aircraft, the nod to technologies with societal knock-on effects adds a fascinating dimension to the festival and encourages some fundamental questions to be addressed.

This week’s secret projects – we’ve been chimp-proofing a tortoise, and as much as that sounds like a metaphor, it isn’t. Also the World Cup will soon be here, so we’ve been making a range of huge display pieces for a shop fitting, which unfortunately might remain under wraps for quite some time. Until then, we’re constructing something truly huge in the main workshop, and are putting the final touches on calibrating an energy interactive.

As well as a complete design and fabrication service, we offer each process within our…

PlanLoCaL scale model gets an update

Some years back, Amalgam created a four-baseboard modular scale model of a generic British urban…

The government is to make big changes to the way it subsidises renewable energy, it…