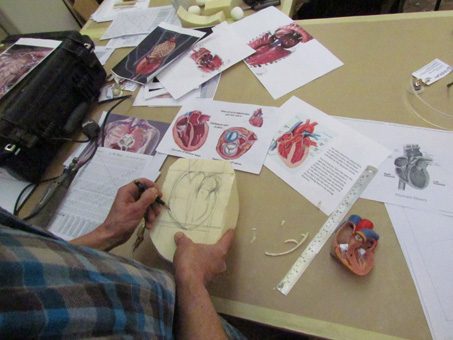 Interactive Exhibition displays for the upcoming Body Works Exhibition at the Glasgow Science Centre form one of the latest projects for Amalgam's Display Team. We have been making a series of sculpted and electronic interactive exhibits for this prestigious exhibition which is being supplied mainly by Huttinger Exhibitions. The  displays being created at Amalgam include a cut-away heart valve model displaying a life size heart, sculpted and art worked in house, showing the position of an artificial heart valve with alternative heart valves also on show. A scale model of an artery system will show the position of a stent, and we are creating a display for a bionic hand developed by Touch Bionics. The largest and most complicated display is a life size human torso, show casing the Total Artificial Heart system made by Syncardia.  This exhibit will show the position of the heart within the torso, nestled between…

Hydrate for Health inventor Mark Moran could be heard this morning in a radio interview with well-known TV & radio broadcaster and GP Dr Philip Hammond.  Since finding himself frustrated by not being able to reach a drink following a spinal operation Mark has dedicated his life to the solution, forming his own company Hydrate for Health to develop and promote his Hydrant idea.  It has been several years since Mark first approached Amalgam to help him design The Hydrant but we are still in contact and follow the progress of Hydrate for Health and The Hydrant in particular.  Our original case study can be read here. https://www.amalgam-models.co.uk/projects/the-hydrant-water-bottle. describing how we used a combination of 3D scanning to design the screw cap with its combined clip /handle  feature, which was followed by rapid prototyping of the design and resin vacuum casting to produce a batch of trial parts.  You can…

The Pourty has been another of Amalgam's prototyping success stories. We developed the original working prototype with John & Lucy Rathbone, the designers of the product, and produced several colour variants as working prototypes and marketing tools. The Pourty potty won Best New Product to Market 2010/11 and is consistently rated 5/5 in potty reviews for quality, value for money and ease of use. It has gone on to be stocked world-wide by the vast majority of high street retailers. You can read a mother's review here: http://creativelycheapconstantlycrazy.blogspot.co.uk/.

MCT's SeaGen tidal system, located in Strangford Lough, has featured on the BBC 1 television programme, Countryfile (Sunday, February 10th) for a second time. Comments were made on the massive potential for tidal power in the British Isles. Watch the video here: http://www.bbc.co.uk/iplayer/episode/b01qsl55/Countryfile_10_02_2013/. We have provided a number of models for MCT and the SeaGen project; head to Our Work to see a 1-metre demonstration model and a small-scale desktop miniature.

Developers Hammerson and Westfield have reached a joint venture agreement and are set to begin a massive redevelopment of the Whitgift Centre in Croydon. Following the announcement, other development proposals began to flood in, making the announcement a 'tipping point' in the Council's efforts to revitalise the area. Following the 2011 summer riots, the council landed £23 million from the Greater London Authority to fund regeneration schemes. Croydon has a legacy of failed regeneration and the £1 billion joint venture promises to be the beginning of a process which will see the creation of new retail centres, leisure and public spaces, and over 7000 new homes in Croydon's centre. Firms involved include Studio Egret West, Allies and Morrison and HawkinsBrown.