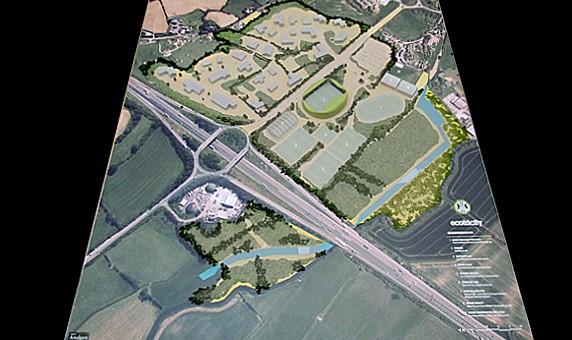 Beyond dynamic lighting, there are other methods for making a masterplan model interactive. Our recent interactive masterplan for Ecotricity was developed as a simple, chunky, massing model, to assist with decisions being made in the formative stages of the design.

Ecotricity founder and Forest Green Rovers Chairman, Dale Vince, wanted us to create an interactive masterplan model for their new Ecopark scheme. The site included the Forest Green Rovers new home stadium and sports campus, an environmentally conscious ‘Green Technology Hub for likeminded businesses from the green economy, and natural wetland reserve set around a redirected canal. Forest Green Rovers have also recently shortlisted nine stadium designs from almost 50 entries by architects based around the world in a competition to create the club’s new home.

Adapt the masterplan with an interactive model

The customer knew they needed a physical model, but were facing multiple challenges. The designers began with a 2D graphic visual for the development, yet wanted to experiment with the site layout, before they finalised the CAD. As some of the major design aspects were undecided, the customer required a base model with freely movable buildings, which could act as an interactive construction kit of generic elements.

This approach allowed the Ecotricity design team to visualise the mass of the buildings in context of the open spaces around the Ecopark. As the environmental aspects were decided and individual building designs became finalised, the model had to allow scope to grow and change during the process.

Communicate benefits of the design

The architectural model was ultimately required for communications throughout the public engagement phase, so the quality had to be presentable as a display marketing tool. These considerations gave us a broad scope to design and construct an interactive masterplan in a hybrid style that could fulfil those multiple duties.

Since the scheme was in its early stages, the design mainly existed as massing renders and blocked-out graphic visuals. Our solution for the look of the model was to directly reference the primary graphic visual as our master drawing. The visual was drawn digitally over an aerial photograph, presenting a pleasing contrast between the existing countryside and the new site – a feature which we wanted to retain.

The relative simplicity of this helped us to meet the customer’s model design brief, within their budget. We used the same aerial photograph printed on durable vinyl laid over the baseboard, and contoured over landmarks, such as the motorway junction and banking.

The main site and interactive elements were restricted to simple, unambiguous colours and shapes, as presented in the visuals. For marketing purposes, treating the model as a graphic visual, extrapolated up into three dimensions, created a visual consistency with other 2D imagery of the site. The resulting aesthetic of the model fitted well with Ecotricity’s broader marketing endeavours.

Designed for travel and practical use

In order to give the Ecopark the desired interactive flexibility without leaving loose buildings on the baseboard to damage one another, we embedded the site buildings with magnets. These were strong enough to hold the buildings fast to the baseboard, constructed with a thin steel plate beneath the top layer of veneer. The designers could arrange the buildings of the Ecopark to the desired configuration, and the magnetic ‘grip’ contributed to the satisfying, chunky, hands-on feel of the model. The added strength allowed the model to withstand bumps and knocks when tilted or transported.

This Ecotricity model demonstrates how interactive models can support every stage of the masterplan design process. At Amalgam, we are well equipped to solve design challenges associated with creating memorable user experiences; ranging from traditional exhibition interactive design, to the integration of contemporary digital technologies – with support from our digital agency partner, Intergalactic.

Call us on 0117 9249596 for more information or head to Our Work for more examples of interactive models.

An Overview of our Sculpting Services

We are in the run-up to our third annual Halloween Pumpkin carving competition, the #AmalgamCarveOff,…

An overview of our CNC machining services

At Amalgam we provide a range of premier CNC machining services. This covers machining forms from…